I am a PhD student in the School of Journalism and Mass Communication, and I am in my final semester of classes. My area of research interest is how the atomization of the 20th century mass media system has affected news in the 21st century, especially on television and the Internet. I often joke that it's a fancy way of saying I study Fox News, but that would, in fairness, be a gross over-simplification (but usually good for a laugh).

Before returning to school, I worked as a writer and editor for publications in different media (books to the Web), beginning in legal publishing after a year of practice as an attorney. I still am a featured blogger for Huffington Post. And I produced, wrote and directed film and video projects, including features, shorts, commercials, music videos and corporate films.

Greg asked us to post a photo, but, really, nobody wants to look at a picture of me. So, instead, here is a photo of my wife and son walking ahead of me in the groovily-lit underground passage between terminals in the Detroit airport. 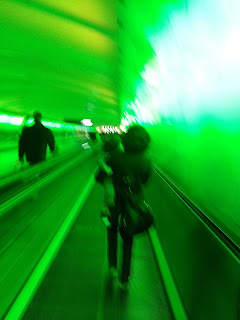