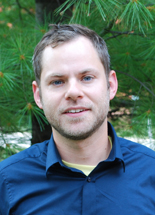 Richard K. Popp is an assistant professor of media studies at the University of Wisconsin-Milwaukee. He teaches JAMS 262: Principles of Media Studies and JAMS 860: Media and Consumer Culture. His research interests include the history of consumer culture, media history, media and cultural space, mobility and social memory. From his curriculum vitae one learns that he previously taught at the Manship School of Mass Communication in Louisiana State University. He obtained his Ph.D. from Temple University and has an M.B.A. in marketing and B.A. in communications from Virginia Tech. Prior to pursuing his doctorate degree he worked as an “Operations Coordinator” for Discovery Communications Inc. a company which produced the cover art for DVD/ video packaging coordinating the fulfillment of video masters, artwork, scripts, and was responsible for all aspects of editing and publishing international home video/DVD catalogs. He was also at one point a DJ for a radio show.

Popp is not a celebrity intellectual, so there is no information about his personal life on the Internet beyond that which can be found in his CV and which I have detailed above.

He has most recently published a book titled The Holiday Makers: Magazines, Advertising and Mass Tourism in Postwar America (2012) which argues that advertisers are primarily responsible for creating the American tourism industry and the modern American tourist. In her favorable and lightweight book review titled “Did ads make the American tourist?” (2010) from phys.org, Erin Nordloh notes that according to Popp print media advertising “redefined America’s notions of leisure time.” Nordloh notes that according to Popp the print advertising industry in the 1930s saw an opportunity to cash in on the American middle class’ newly gained “vacation time” or “holiday time” from work by redefining “tourist travel as an expectation of American life.” 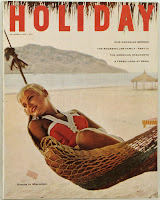 With increasingly sophisticated photographic and image processing techniques advertisers were able to gouge readers interest in seeing exotic destinations and to make it seem as if everyone was already going everywhere, though nevertheless, for a “once in a lifetime experience”. If there is a limitation to Popp’s research for this book, it is only that he primarily focused on advertising by one print publication titled “The Holiday” a 1940’s travel magazine. There is another review of this book out there, but the oxford press published it and I could not access it. The book appears to be too recent so there are not other reviews of it yet.

Popp is also the author of several published journal articles. Besides authoring the article “Making Advertising Material: Checking Departments, Systematic Reading, and Geographic Order in Nineteenth-Century Advertising” (2011) published in the journal Book History, where he explains that the advertising industry began as a “checking” industry that spurned the collecting of periodicals by libraries, he has also articles such as “Machine-Age Mobility: Media, Transportation, and Contact in the Interwar United States” (2011) published in Technology & Culture, “Domesticating Vacations: Gender, Travel, and Consumption in Postwar Magazines” (2010) published in Journalism History, and “Visual Culture, Public Space, and Piety in Focus on the Family’s Citizen Magazine” (2010) published in Critical Studies in Media Communication, and finally he is the author of “‘X’-ing Out Enemies: Time Magazine, Visual Discourse, and the War in Iraq” (2010) co-authored with Andrew Mendelson and published in Journalism: Theory, Practice and Criticism.

Three of the above-cited articles are really interesting: 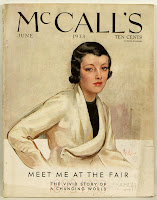 In the article “Domesticating Vacations: Gender, Travel and Consumption in Postwar Magazines” Popp:
"examines how post-World War II magazine narratives made tourist travel part of a larger discourse about gender, sex, and consumerism in American society. [Popp’s] study finds that while magazines often depicted travel as a carnivalesque activity disruptive of everyday domestic norms, they also circulated narratives that reconciled those fantasies with dominant conventions of femininity and masculinity. By exploring the meanings attached to vacation travel during this period, scholars can better understand how magazines, as engines of consumer desire, mediated between transgressive and structured aspects of American …" (“Domesticating Vacations” Abstract)

The above cover picture from the June 1933 issue of McCall magazine seems to illustrate Popp's idea of a connection between holiday activities, such as attending the fair, and the classical white femininity embodied by the cover model.
In the article “‘X’-ing Out Enemies: Time Magazine, Visual Discourse, and the War in Iraq” Popp and Mandelson examine

"Time magazine’s visual discourse in its coverage of Iraq War insurgent Abu Musab al-Zarqawi’s death. Time marked the event by using the same visual trope – a head crossed out by a red ‘X’ – used to mark the fall of Saddam Hussein in 2003 and Adolf Hitler in 1945. The study provides a semiotic analysis of the cover, traces the historic development of the ‘X’, and compares it to rival Newsweek’s coverage. Time’s cover points to the way visuals are used to make journalistic statements that would not be acceptable to convey verbally. The study suggests that Time used Hitler imagery to establish authority by invoking its historical coverage. And by drawing such a close association between Hitler, Hussein, and al-Zarqawi, Time personalized group conflicts, presented a Manichean view of the world, attributed a false sense of finality to ambiguous events, and reinforced administration pro-war arguments." (Popp & Mandelson 203; Abstract)

And finally in the article “Machine-Age Communication: Media, Transportation, and Contact in the Interwar United States” Popp examines how

"Many American intellectuals and business figures between the world wars envisioned modernity as an era of heightened spatial connectivity ushered in by a new array of mass-marketed communication technologies. Consistently paired in public discourse, media and transportation products and services were thought to be mechanizing everyday routines and rendering contact with faraway places a habitual part of modern life. Within this context, key events such as Richard Byrd’s polar expeditions and the New York World’s Fair were taken as metaphoric for a coming era of perpetual connectivity. For industry champions, communication devices offered users agency to live beyond their immediate environments. Critics—framing communicative contact in terms of contamination, imperialism, and escapism—saw the same technologies ensnaring leisure time and spaces within the domain of consumer capitalism.…" (Popp: Abstract)

The first image above is of a cover of the December 1940's cover photograph of The Woman's Home Companion and it illustrates a woman attaching a flag to her car radio antenna. The second image is a photograph of passengers viewing an in-flight movie in a 1945 Pan-Am flight. Both images illustrate Popp's idea that media and transportation were increasingly seen as mutually supportive in the interwar period.