I was thinking we could organize our book topics around 6 revolutionary printing technologies of the 20th and 21st century. The idea is that each chapter, depending on its topic, would feature a print or printing product as an example/ embodiment of that topic. Together, each chapter and featured product would illustrate different convergent concepts in relation to 20th and 21st century developments in the history of print and printing. We could look at what these products promised and at how they have helped change the rules for how we engage with print. I have actually picked mostly products for which there is also a personal printing counterpart product. I think it would be interesting to explore how each product both enables personal printing practices that copyright rules of fair use then crop up to attempt to restrict. Below I first list potential products to be featured and the topics they could be related to. Then I elaborate on each idea.

Possible Products & Related Concepts/ Topics:
1. The Typewriter & Word Processors
We could connect these products to how they changed standard business practices.
2. HES & FRESS Hypertext
We could connect this product’s history to the concept of accessibility, the rise of the Internet and how it revolutionized access to print materials.
3. Computer printers & personal printer
We could connect this product to the concept of empowerment, and how personal printers enabled anyone to distribute print materials such as flyers and posters.
4. The E-Reader, Smartphones & E-Books
This could also be connected the exponential increase in digital print materials and formats and to the accompanying proliferation of copyright restrictions.
5.  E-Book Authoring Software (Such as I-Books Author!)
This could be connected to the topic of self-publishing and what are some ways in which the producers of these software attempt to restrict their uses.
6. 3-D Printing & 3-D Personal Printers
This product could be connected to the blurring of the line between printing and manufacture and the connection between printing, consumption and innovation. This would be the more future-looking chapter.

The typewriter and later computer word processors made it possible to create legible copies of texts faster by potentially any individual who owned it. As we read in “The Paperless Office” they revolutionized business practices, including the relationship between executive and secretary and the further professionalization of secretarial jobs.

They were also used by journalists and novel writers. They helped create a modern problem, the carpal-tunnel syndrome. While type-writers were displaced by word processors in the 1980s, they influenced computer word processing in great part by imposing the QWERTY standard keyboard. Digital Word Processing and the use of the QWERTY keyboard are now ubiquitous standards in the business world.

The HES and FRESS Hypertext: We should discuss how hypertext, together with the Internet, seemed to actualize the ideal of universal access to information and how later developments, such as firewalls, passwords, copyright laws and so on sought to restrict that access. Hypertext Editing System (HES) and the File Retrieval and Editing SyStem (FRESS) were pioneering hypertext-producing technology developed at Brown University between 1967 and 1968. (Wikipedia). I think we should feature HES & FRESS as part of a milestone in the history of print because hypertext is a great part of what made building the Internet possible. HES & FRESS were all about making digital pages more accessible and hypertext was all about making the Internet more accessible and easier to navigate.

I think we should feature the personal printer in our e-book because it has itself been a tremendously revolutionary product. According to Wikipedia
Most noteworthy was the role the laser printer played in popularizing desktop publishing with the introduction of the Apple LaserWriter for the Apple Macintosh, along with Aldus PageMaker software, in 1985. With these products, users could create documents that would previously have required professional typesetting. (Wikipedia)

The E-Reader, Smartphones & E-Books: This could also be connected the exponential increase in digital print materials and formats and to the accompanying proliferation of copyright restrictions. As you know, some e-readers such as the I Pad function more like computers and allow users/ readers to access written texts, movies, applications and “enriched” e-books. E-Readers and smartphones have contributed to the exponential proliferation of newer print products, such as “applications.” Most printed materials, such as webpages and e-books, now exist in different formats intended for use through tablets or smartphones. With the proliferation of more digital print products in various formats, newer restrictions and copyright rules crop up.

On the positive side, E-Reader and E-Book because give the users/ readers, by now mass users, the ability to “re-produce” purchased or public domain texts on a digital screen. The user/ reader is can now have more various books opened while searching the Internet or reading a PDF journal article and more. E-readers and e-books thus potentially empower the user/ reader to read a greater variety of books and documents, to read them more frequently, and to read this greater variety more frequently from anywhere: on the bus, at McDonalds, at the beach.

E-Books Authoring Software: I think we should feature e-book authoring software because it has revolutionized self-publishing and made our class project possible. Some e-book authoring software can only create PDF books, others can produce more interactive e-books. A few examples of these software are I-Books Author for Mac, and Desktop Author and EBooksWriter for Windows. I think we should talk about the most cutting edge e-book producing software and what it allows individuals to produce almost on their own.

3-D Printing and 3-D Personal Printers: 3 D printing seems to be the most cutting-edge in “printing” technology. It actually blurs the line between printing and manufacturing. I think we can relate this blurring of the line between technologies, which I mentioned in relation to the E-Reader Tablets and the smartphones, as both a byproduct of consumerism and something that enables consumerism. (HP will actually soon release new mobile 3-D printing application that will allow users to use their phones to send an object to be printed in their 3-D printer.) Consumerism can be seen as important engine of innovation in print and printing products in the 20th and 21st Century. I think 3-D printers embody consumerism because of their close relation to product manufacturing. They also further illustrate the ethical complications around increasing and restricting access that arise when individuals obtain technologies that allow them to print and to produce high quality graphics and materials. 3-D printers basically allow the user to “print” a 3-D model for an object in either plastic or metal or other materials. Here is how The Week magazine describes 3D printing and compares and contrasts it to regular printing:
Just as a traditional ink-jet printer sprays ink onto a page line by line, modern 3-D devices
deposit material onto a surface layer by layer, slowly building up a shape. (The Week 11,
January 18 2013)
The New York times also published a piece on personal 3-D Printing/ manufacturing. The coolest and scariest thing about 3-D printing is that it is quickly evolving. According The Washington Post some people are using 3-D printers to print weapons while according to The Smithsonian scientists are in the process of modifying the technology to use stem cells to print human organs. 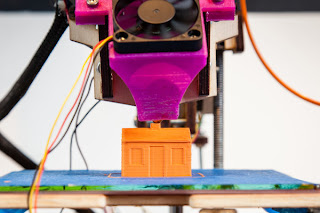