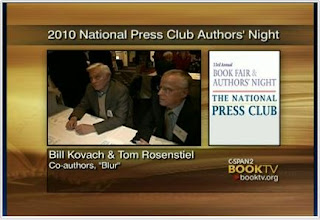 Bill Kovach is an American journalist, author, and educator who has worked in the newspaper industry since the 1960s. He was formerly a New York Times Washington bureau chief and editor of the Atlanta Journal-Constitution, where he oversaw a staff that won two Pulitzer Prizes. He has previously taught at Harvard University, where he was also curator of the Nieman Foundation for Journalism, and the Missouri School of Journalism. His efforts as an advocate on behalf of journalistic ethics and professional standards extend beyond education to public outreach through his involvement with the recently shuttered Committee of Concerned Journalists, a consortium of reporters, editors, publishers, owners, and academics that he co-founded, as well as the Pew Research Center's Project for Excellence in Journalism. He has co-authored three books (all with Tom Rosenstiel), most notably the widely influential The Elements of Journalism: What Newspeople Should Know and the Public Should Expect (2001), which outlines an "objective methodology" for news reporting. In addition, Kovach and Rosenstiel have penned two books concerning the problems encountered by journalism in the face of television and the Internet, Warp Speed: America in the Age of Mixed Media (1999) and BLUR: How to Know What's True in the Age of Information Overload (2010).

Tom Rosenstiel is also an American journalist, author, and educator who has worked in the industry for over 30 years. In that time, he has been employed by the Los Angeles Times and Newsweek magazine, as well as taught at the Missouri School of Journalism. He is currently a member of the National Advisory Board of the Poynter Institute. Like Kovach, Rosenstiel's efforts in the last two decades have been focused primarily on press criticism and on studying and improving press performance. He was the founder and longtime director of the Project for Excellence in Journalism, and along with Kovach he was a co-founder of the Committee of Concerned Journalists. Rosenstiel recently left the PEJ to become the executive director of the American Press Institute, the foundation of the Newspaper Association of America. In addition to his books written with Kovach, he has authored Strange Bedfellows: How TV and the Presidential Candidates Change American Politics (1993) and co-authored Thinking Clearly: Cases in Journalistic Decision Making (2003) and We Interrupt This Newscast: How to Improve Local TV and Win Ratings, Too (2007).

BLUR was met with mixed reviews when it was published in 2010 (critical attention seems to have come mainly from within print journalism circles; it being a popular press book, it doesn't appear to have received much attention within the academic press). The Columbia Journalism Review stated that it is "a book of mixed messages and unfulfilled potential," critiquing especially its didactic nature, the authors always breaking down journalism into rigid descriptive categories that are rooted in old-fashioned methods that don't adequately translate to the present media environment. Along these lines, CJR also criticizes Kovach and Rosenstiel for idealizing a particular strain of journalism (set apart from "the press writ large") that "emphasizes the noble and progressive aspects of journalism." This "cherished conception of journalism," CJR's reviewer argues, despite the attempts that the authors make to adapt it to the new media environment in the last chapter (which is the one we read), may simply be out of step with the realities of journalism's present and future.