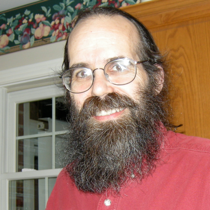 Let us start with what Mike Gunderloy is not, a university professor, and what he is no longer, a zine writer, designer or publisher. He is now an stay-at-home parent who write his blog and programming books from home (yes, computer programming). Gunderloy is probably the random-est personage we will read about in this class. He went from being the father of zine, enthusiast of self- and small publishing, to becoming a computer programmer! To be accurate it is true that Gunderloy already worked with computers as early as 1992, when he began editing the zine review zine Factsheet 5.

One could say that is rapid career turnover parallels the life cycle of zine production, publishing and ephemeral existence.

Though Gunderloy loved zines according to Wikipedia he suffered a nervous breakdown while publishing Factsheet Five, a meta-zine that used to review other zines, and consequently left the zine scene and became a full time computer programmer. He is a successful published author in the world of programming. He is also the owner of Lark Group, a computer consulting firm and is a consultant himself. If you do a search for Mike Gunderoy on Amazon or Barnes and Noble you will get more programming books than anything related to zines.

Besides The World of Zines, A Guide to the Independent Magazine Publishing (1992) Gunderloy is known for being the editor of Factsheet Five (1992-1998), the first zine-review zine, which ran from 1992 to 1998 (when he quit due to his mental crisis). He is also the author of numerous programming books, among the most recent of which are, Painless Project Management with FogBugz (2007), a programming book, which is what “project management” means, MCAD/MCSD 70-306 Training Guide (2002) a guide to building Windows applications, and many others, including Coder to Developer: Tools and Strategies for Delivering Your Software (2004).

Judging by the price of his programming guides and textbooks on BarnesandNoble.com, Gunderloy is making a fortune off of his change of writing genre! “FogBugz” goes fro $40.49 while the MCAD guide goes for $51.12, and these are just 2 of his innumerable programming books, guides, booklets, you name it. We should all become programmers! Or team up with a programmer and help make their books reader-friendly.

Gunderloy’s new writing subject seems to have allowed him to stay at home and home-school his 4 children, which he mentions on his blog http://www.larkfarm.com. His new tranquil life seems to be in great contrast to the hectic life of the zine writer, designer and publisher, who has to work a day shift and then work on his zine. It is difficult to imagine two more different genres of writing than zine writing versus programming, so I wonder how different Gunderoy sounds in either genre. As far as the online reviews of Gunderoy’s programming books go, they don’t really focus on his wit, but rather on weather the book he has written can actually get you to learn a particular program and to start programming. Nevertheless, I found his personal blog entries on his mostly professional blog to be readable, even if he writes them in guide format, dividing everything into subheadings and bullet points (even when he is talking about his neck pain, he is more interested in telling us the names and numbers of the vertebrae than about his pain).

Finally, to judge by Gunderloy’s resume, which is published on his blog page, the man is a bit of a jack-of-all-trades, which makes sense for a man who was a zine writer, designer and publisher while being a programmer. While working for DANJEN Computersin New York in 1992, Gunderloy was the sales manager while also assembling computers and delivering training courses! While working for HOSPITALITY MARKETING SYSTEMS also in New York from 1992-1993 Gunderloy “managed bookkeeping staff and maintained computer network” and his title was “comptroller.”

In online photographs of Gunderloy he looks somewhat like a weathered hippie, with a straw hat and a rough medium-length beard and crinkly and affable smile lines around his eyes. He likes to go “Cold Weather Hammock Camping” in his backyard and like the textbook writer he is he has written an article about it describing all the equipment needed to perform this hobby like a pro on his blog, under “miscellany.” His hammock camping may have something to do with his neck problems.

Will he ever take up zine writing again? He seems to be too wrapped up in his programming textbook writing projects and computer consulting jobs to give it a second thought. Not to mention his kinds!