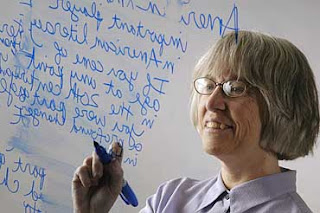 Deborah Brandt is a Professor Emerita of English here at UW-Madsion. She was at UW from 1983 until her retirement around 2010. According to her UW profile, her research "focuses on the social contexts of mass literacy and literacy learning in the late 20th and early 21st century." The Guggenheim Foundation has called her "one of the leading lights in the field of literacy studies."

Brandt is the author of three books and numerous other articles and reports. Her first book, Literacy as Involvement: The Act of Writers, Readers, and Texts (Southern Illinois Press, 1990), which examines the social and cultural roots of reading and writing through a "process perspective," won the David H. Russell Award for Distinguished Research in the Teaching of English from the National Council of Teachers of English (NCTE). Her 2001 book Literacy in American Lives (Cambridge University Press) earned her the prestigious Grawemeyer Award in Education, as well as the Mina P. Shaughnessy Prize from the Modern Language Association. She has held various fellowships and visiting scholar posts and received numerous research grants from, among others, the National Endowment for the Humanities (NEH), American Council of Learning Societies (ACLS), the National Research Council, and the U.S. Department of Education. Brandt received a Guggenheim Fellowship in 2011, during which time she began research on a forthcoming book to-be-named Writing Now: New Directions in Mass Litearcy, which she describes as "a study that explores the ascendancy of writing as a second stage of mass literacy, focusing on the impact of writing as a means of production in the American economy since about 1960."

Professor Brandt has also been very active in the local Madison community, supporting various social justice and educational opportunity initiatives. She is a longtime volunteer with the Madison Urban League, as well as a member of the Education Committee of the NAACP Madison Branch. She was awarded the NAACP's W.E.B. DuBuois Advocate Award in 2001 and was also twice nominated for the Madison Urban League's Martin Luther King Humanitarian Award in recognition of her work with Madison middle-school students.