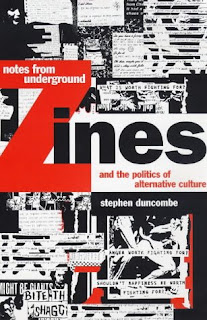 Stephen Duncombe's Notes from Underground: Zines and the Politics of Alternative Culture (Verso, 1997) is a study of the history and politics of the (American) small-scale underground publishing culture that was most prevalent in the 1970s and 1980s and peaked in the late 1990s, soon after the book's publication (when it was usurped by the Web and digital self-publishing formats like blogs).

In the first of the two chapters that we read (Chapter 1, "Zines"), Duncombe seeks to define "zines" and their cultural significance. He offers three working definitions of his object. The first definition starts as something of a non-definition: that zines are wildly eclectic and eccentric and something that the reader needs to judge for him or herself. That is, zines cover a range of topics from music, science fiction, comics, and other pop culture categories to politics, sports, travel, religion, sex, and personal diaries. But he eventually determines that amidst all the diversity, zines (and zine publishers) share an element of "political self-consciousness" and what he calls a "vernacular radicalism" (p. 3). His second definition focuses on their countercultural and often anti-consumerist, or at least anti-mainstream, status: "zines are noncommercial, nonprofessional, small-circulation magazines which their creators produce, publish, and distribute by themselves" (p. 6). He ultimately settles on a third definition that combines elements of these first two definitions and emphasizes the social and cultural aspects of zines: "zines are decidedly amateur" (p. 14). Here, he highlights the zine culture's oppositional status to mainstream consumer culture, in particular its members position as active, empowered citizens. For Duncombe, "amateur" is not the pejorative term that it has become in our contemporary society (i.e. non-professional) but rather an indicator of freedom of expression, community, and cultural resistance. Throughout the first chapter, Duncombe calls attention to a number of similar themes that he sees as being prevalent within zine culture: protest, opposition, discontent, marginalization, "participation among equals" (p. 12), and an adherence to personal interest above all else (bordering on what sounds a lot like libertarianism or even anarchism, though Duncombe doesn't quite make those connections, at least not in these chapters).

The predominant theme that Duncombe explores, though, is that of the do-it-yourself (DIY) ethic. Our second chapter (Chapter 5, "Consumption") focuses on the role of consumption in late capitalism and positions the zine culture's embrace of the DIY ethic as a critique of capitalism's oppressive culture of consumption. Duncombe traces out a Marxist analysis of mass culture in which he argues that consumerism separates individuals from the products and media that they consume, and that this alienation makes citizens passive. While he stops at calling people unknowing dupes, he does believe that the mass of people believe "that there is no alternative," as he writes in Chapter 1 (p. 6). "Doing it yourself is at once a critique of the dominant mode of passive consumer culture and something far more important: the active creation of an alternative culture. DIY is not just complaining about what is, but actually doing something different" (p. 117). Zines, he posits, offer up an alternative, in large part by turning ordinary citizens into active participants in, and creators of, the culture they consume, and not just passive recipients of it. Zines are a form of "talking back" to cultural producers (p. 108), and in particular to the dominant culture that zine writers/readers feel marginalizes them and/or does not accurately represent them or their interests. This ability to criticize and negotiate cultural meaning and power hinges on the DIY ethic (and cheap printing technologies like photocopiers). Importantly, zines "level the ground" (p. 109) and break down distinctions between producers and consumers, readers and writers, et al. Ultimately, Duncombe believes that DIY zine publishing offers "a model of participatory cultural production and organization" that at least has the potential to be the basis for a truly participatory democracy (p. 129).

While Duncombe does offer up some critiques of the relatively privileged status of most members of the zine community (e.g. white, educated, middle-class), as well as acknowledges the relatively circumscribed position of these underground publications, I'd argue that he still overly idealizes them. Also, despite pointing to the wide range of publications that fall under the "zine" category, his analysis seems to focus almost exclusively on zines from the punk subculture. These publications are hardly representative of the zine culture writ large, and so his universalizing claims about the politics of the zine culture seem suspect. And while he includes an array of perspectives from zine publishers, the audience for zines is conspicuously silent (including also the audience/consumers of commercial mass culture). More than anything, though, Duncombe's critiques of commercial mass culture are simply too reductionist. Although he breaks down binaries such as producer/consumer, his abstract and simplistic ideas about commercial culture end up reifying other binaries between alternative/mass and folk/consumer culture.