From reading their respective bios on their institutional websites, I saw that not only do Renee Hobbs and Amy Jensen have extensive and impressive lists of credentials and accomplishments in addition to being the co-founders of the Journal of Media Literacy Education (currently in its fifth year of publication), but they also have backgrounds that are extensively interdisciplinary, and they both participate in initiatives that go beyond their institutional settings. 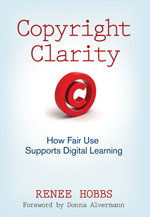 Renee Hobbs is a “Professor and Founding Director” of the Harrington School of Communication and Media at the U of Rhode Island.  This school, as I understand, comprises the traditional departments of journalism, film and media studies, communication arts, public relations, composition and rhetoric, and library and information science, and it focuses particularly on communication and digital media.  Hobbs has written several books, including Digital and Media Literacy: Connecting Culture and Classroom (2011), Copyright Clarity: How Fair Use Supports Digital Learning (2010), and Reading the Media: Media Literacy in High School English  (2006).

Amy Jensen is the chair of the Department of Theatre and Media Arts at Brigham Young University.  This department puts a strong emphasis on media education, which is reflected in Jensen’s background: before she was appointed chair, she worked with the undergraduate Theatre and Media Education Program and the Media Education Master’s Degree Program.  Jensen has also written and co-edited several books, including Theatre in a Media Culture: Production, Performance and Perception Since 1970 (2007), and (Re)imagining Literacies for Content-area Classrooms (2010).


In addition to their academic positions, both Hobbs and Jensen do work outside of the university setting.  Hobbs helped developed “Powerful Voices for Kids,” which is “a university-school partnership that offers a comprehensive program for K-12 schools including a summer enrichment program for children, staff development program, hands-on mentoring and curriculum development, and parent and community outreach.”  Jensen directs the Theatre and Media Arts Department’s “Hands on a Camera,” which is a service-learning project in which “BYU theatre and media education students work with in-service public school educators to train young people in media literacy and production skills.”  Hobbs also founded the “Media Education Lab,” which focuses on improving media literacy education “through research and community service.”